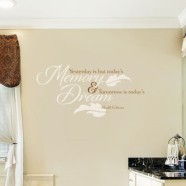 Whatever you can do, or dream you can, begin it. – Goethe

It’s the time of the year when we sit down and make a list of the things we want to achieve and vow to do. Haven’t you noticed that we almost always do this at the start of the year and never (or almost never) at any other time of the year? Many of us stumble along the way after we make these, some fall right off the path and then say, “Forget it!” But there are some of us who diligently make them, realistically acknowledging that making resolutions and sticking to them is going to be very hard but we’d like to do it anyway.

Here’s a thought: If you don’t make the resolution there’s nothing to work towards, no goal to try to reach. That’ll make us complacent and no longer mindful of what we have to do. Here’s an example. weight loss. We have a friend who’s been struggling with her weight for many years, until one day she decided to jump in and little by little work on losing weight. She made the resolution in January 2012, started implementing it in May 2012, and to date (December 2013) she has lost 18 lbs. She started steaming and baking her food instead of frying it, cut down on the carbs, cut out the salt and used herbs and spices to season her food, ate several small meals in instead of big meals, used whole wheat bread instead of white bread, and made and drank raw vegetable juice. Once a day, as a replacement meal, she drinks a glass of psyllium fiber in water – doesn’t taste good but heck, it’s needed to get that sexy body back. She does treat herself to a piece of dark chocolate every now and then and eats out once a week, choosing the reasonably healthy food on the menu. Walks once a week too for exercise. Small deeds done are better than great deeds planned. – Peter Marshall

Certainly she would have lost more weight if she totally didn’t eat out and exercised religiously every day but she had to work and didn’t want to spend money on the gym when she knew fully well that she wouldn’t be able to maximize her gym membership. She still has a long way to go – she wants to lose 20 to 25 lbs more – but the great thing is, she IS losing weight, albeit slowly. She has gone from an XL to Medium in clothes and has vowed to get rid of all her plus-sized clothing so that she’ll be forced to keep her weight and size down. These days between a piece of fried chicken and a piece of steamed skinless chicken breast she’ll unhesitatingly choose the latter. Motivation Is What Gets You Started. Habit Is What Keeps You Going.

So January is coming fast, and we’re drawing up our own list of New Year’s Resolutions. Is there anything in your bucket list that you’ve dreamed of doing but never got around to it? Now is the time to make that dream a reality. Too busy to go to the gym or can’t afford it? Briskly walk in your village either in the early morning or in the evening for at least 30 minutes each time. Then slowly increase that to an hour. While you’re at it, download a free app for your smartphone so that you can count the number of steps you walked. Invest in a weighing scale if you don’t have one. While some people get frustrated when looking at their weight every day, our friend finds that the numbers challenge her. If she gained weight then she eats less or cuts out the no-no food in order to bring it back down again. The thing is, you can tailor your diet or exercise to what works for you. Here’s a piece of advice from a famous person: It always seems impossible until it’s done – Nelson Mandela.

So this coming New Year, get the thought out of your mind that it’s useless to make resolutions since you won’t be able to stick to them anyway. Fall seven times, stand up eight. – Japanese Proverb. The idea is to start. If and when you fall, just get right back up again, and keep going. One day you’ll see that all those little things you did helped you reach halfway to your goal. Whatever your goal may be, take the baby steps now.