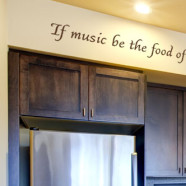 January 27th is Wolfgang Amadeus Mozart’s birthday. This year he would have turned 257 years old. He was born in Salzburg, Austria to Leopold and Anna Marie Mozart. A child prodigy, in his lifetime Mozart composed over 600 musical pieces and is well-known for his symphonies, concertos and operas. Today his music remains popular among classical music aficionados, and some of his pieces have been adapted to modern music. Each interprets in his own way the music of heaven. Mozart learned to play the piano at the age of three, while looking on as his seven-year-old sister Nannerl was given piano lessons by their father Leopold. Leopold himself was a successful composer, violinist and assistant concertmaster to the aristocracy in Salzburg. When Wolfgang was four Leopold started giving him formal piano lessons. At age five Wolfgang started composing his own pieces, and at six was performing in public. Leopold, a seasoned teacher, made learning fun for Wolfgang and Nannerl. Besides music he taught them languages and academic subjects. Mozart also learned to play the violin and clavinet. Music produces a kind of pleasure which human nature cannot do without. – Confucius

Much of Wolfgang’s early childhood was spent travelling in concert tours with his father and sister, who was also considered a prodigy. When he was 13 and his sister 20, his father left Nannerl , who by now was of marriageable age and was no longer allowed to display her artistic talent in public as was the custom at that time. Leopold and Wolfgang continued touring until he was 17. Wolfgang moved to Vienna, where he met and married Constanze Weber in 1782. Wolfgang and Constanze had six children, of whom only two survived infancy. It was in Vienna that he wrote and performed many of his concertos and operas, and his career flourished. He died in 1791 at age 35 from what is said to be rheumatic fever. At the time of his death, he was considered one of the greatest composers of all time. Use the talents you possess, for the woods would be very silent if no birds sang except the best. – Van Dyke On Wolfgang Amadeus Mozart’s birthday, you can renew or begin an interest in his music. Radio stations all over the world will expectedly be playing his symphonies, concertos and operas, and theatrical companies will probably have performances in tribute. Shall we say a date with the hubby at the theater and then a romantic dinner afterwards? If music be the food of love, play on. – Shakespeare